Do you want to know about the best chicken wormers? If your chickens are not eating well, looking sick, and you have seen worms in their poop then this guide may help you a lot.

Like most animals, chicken also gets worm infestations. So, they also need to treat with chicken dewormers.

Chicken deworming is one of the most important things to do in poultry farming. So every chicken farmer should know about chicken wormers and the method to deworm flocks.

Worm infection can make your chickens sick, which may lead to the death of flocks if not diagnosed and treated in time.

Here we have reviewed a few best chicken wormers with a guide on symptoms, causes, prevention, treatment of worm infestation in chickens.

What are Chicken Wormers?

Chicken wormers are also known as chicken deworming medicines. These veterinary supplements are used to treat various types of worm infestation in animals and poultry birds.

Chicken wormer also helps in lice treatment. So, overall these are pet supplements to kill worms inside and outside the body.

The most common medicines are fenbendazole, ivermectin, pyrantel pamoate, piperazine, etc. You may see a few natural chicken wormers which prevent worm infestation in poultry birds. 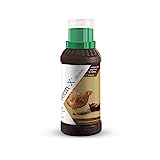 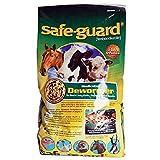 5. GoodEarth Diatomaceous Earth : Best Supplement for Chicken and Farm Animals To Treat All Types of Worms

Above, we have reviewed a few best chicken wormers for your backyard flocks. You can choose one according to the worm infestation or symptoms.

If you only see symptoms like your chicken showing a lack of appetite, you can give natural chicken wormer i.e. Verm-x Liquid. It is safe and easy to use.

Also Read:  Feeding Table Scraps To Chickens: When, What & How to Give?

But If you see worms in chicken poop. Take the droppings to the vet and confirm the type of worm first. Then try Pyrantel Pamoate Suspension and Ivermectin. It is always recommended to ask your local vet before using any chicken wormer.

Below we have added a detailed guide on worm infestation in chickens (Helminthiasis) with natural remedies. If you are a chicken raiser knowing all about deworming chickens is a crucial part of backyard farming.

Guide on Helminthiasis or Worm Infestation in Chickens

Here we are talking about worm infestation, not about worms that move on the soil. Any type of presence of worms in the body of chickens is called Helminthiasis in Poultry (Worm Infestation).

Worms may live inside the intestine, heart, head, skin, and other organs of any animal. In chickens, you will commonly see worm infestation in feathers, skins, eyes, head areas, and intestines.

Like other mammals and birds, chicken is also affected by the parasitic worm infestation. Worms inside the intestine eat all nutritious substances of food and body which cause various health problems in your chicken flocks.

Sometimes the late diagnosis of helminthiasis may lead to the death of flocks.

If you see symptoms of worm infestation in your chicken, take your chicken poop to a veterinarian for tests. They will do a slide test to see worms in the poop.

Your vet will then prescribe a chicken wormer medicine type which we have explained in this article.

Symptoms of Worm Infestation in Chickens: Understand When You Need a Chicken Wormer

If your chicken is not fully active, check its body and poop properly. If you see small worms on poop then you should confirm that your chickens are infested with worms.

It is very hard to see symptoms of helminthiasis in chickens, but if your backyard chickens are not eating properly or eating more, then it’s the first sign and symptom to see.

Check your chickens may have diarrhea. Diarrhea is the initial stage symptom for a few types of worm infestation in chickens. If it occurs again and again ask your vet.

Some chickens puffed up and tucked to get warm if they are going through some serious health problem. You may have to check it out what’s going on wrong?

In a few chickens, you may see symptoms like stretching and gasping for air, which may be because of gapeworm infestation.

It is a very serious problem. Medicine like Ivermectin liquid chicken dewormers works best in this type of situation.

When your chickens have a chronic worm infection, you may see worms in their poop. In this type of infestation, you need to treat your chickens with chicken wormers as soon as possible.

Types of Parasitic Worms that Cause Helminthiasis in Chickens

Roundworms are the common worms that affect chicken’s health. They are about 6-7 cm in size. It mainly causes loss in weight, reduces egg production, intestinal blockage, and more intestine blockage. It also causes growth retardation and mortality.

Tapeworms mainly take all nutrients from intestine food and reduce nutrient absorption by the intestine. They are flat ribbon-like shape worms.

These Gapeworms attach themselves to the trachea of the chicken. So, it causes gasping for air and will stretch their neck because these worms mainly affect the windpipe of chickens. Sometimes you may see eggs of these worms coughing by chickens.

Capillary worms are thread-like structures, and they are microscopic. You can see them from naked eyes.

Causes of Worms Infestation in Chickens

There are so many ways a chicken can get infested with worms. Worms are everywhere in the soil. There is no specific place for worms and we know free-range chickens go everywhere and eat lots of dust and debris.

Chicken gets worms for so many sources. Sometimes they eat whole snails, slugs, grasshoppers which already contain worms in their body that go directly inside the chicken’s intestine.

Most of the animals and birds eat seeds and feed on the ground. All worms live in the soil so the worm goes inside the intestine with chicken feed, treats, and grits which we love to give them.

Sometimes chicken eats droppings and poop of animals and humans. It is a major cause of worm infestation in chickens.

Another most important reason is wet litter in poultry sheds. Litter is the collection of chicken droppings in which flies sit and transmit worms from one place to another. Wet litter makes this transmission possible.

Here are some best chicken coop beddings to keep your poultry house dry and clean.

Sometimes worms also get inside chicken’s intestines through the cloaca when they sit on worms on a litter of sheds.

Worm infestation is a normal thing in the life of all animals and birds. It also occurs in humans. Most people take albendazole and ivermectin every few months for deworming.

It’s not an enormous thing to worry about if we take proper precautions and treatment in time. So, now we will tell you some precautions to avoid chicken worms.

Preventions for Worm infestations in Chickens

It’s very hard to say what to do to prevent worm infection in free-range chickens because they peck everywhere and eat lots of unwanted things every day.

But, If you follow the points which we have given below will reduce the chances of worms in chicken. So, take these steps to keep away chicken worms for your chicken flocks –

So, now it’s time to understand If you see worm infection in your chickens.

How to Deworm Chickens?

We already mentioned various worm infection symptoms above in this post. If you are confirmed that your chicken has a worm infestation after proper diagnosis from the vet, then they may prescribe you some good chicken dewormers.

Most of the dosage of the chicken wormers is present on the product packaging. So, you don’t have to worry about the dose.

Chicken wormers are mostly given in water. They are mixed in water and given in chicken waterers. Above we have given a list of the few best chicken wormers.

Should I Use Chicken Wormers Without Any Symptoms?

No, never use any type of chicken wormers if your poultry flocks are healthy. Most of the chicken deworming medicines contain harmful drugs which may harm your chicken’s health if used unnecessarily.

Also, every chicken wormers contain a withdrawal period for using meat or eggs. Before using you mush check out that section.

You can use natural chicken wormers that don’t have any withdrawal period for both eggs and meat.

How to Deworm Chickens Naturally?

There are several amazing naturals and organic chicken dewormers which you can use in your backyard flocks.

The easiest way to give natural dewormers is through poultry drinkers. Use one teaspoon of Apple Cider Vinegar in each gallon of poultry drinking water to avoid and remove acute helminthiasis in chickens.

Most people say pumpkin seeds will kill worms in the intestine. But it’s not true. If you want to diagnose whether the chicken is infested with worms, pumpkin seed works perfectly to extract out a few worms in feces.

Giving yogurt to chickens makes an unfavorable environment inside the gut for the worms. So, it stops the further development of worms inside the intestine and enhances the health of chickens.

Here we have discussed all chicken wormers. We have included the causes, effects, treatment for worms in chickens naturally, and medicine.

Also, we have explained the top medicines available for deworming chickens. We have added a few natural remedies to prevent and treat your chickens.

I hope you liked this informative guide on the best chicken wormers. What remedies do you use for deworming your chickens? Must share your valuable comments below