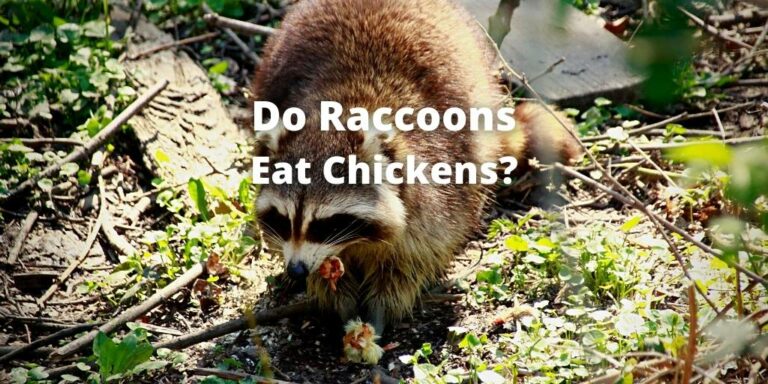 Do raccoons eat chickens? If you are living in a raccoon prone area, this guide will help you to know whether they will harm your chickens, eggs, feed, and other items on the poultry farm.

The raccoon, commonly known as the common raccoon, is the most prominent member of the procyonidae family. They have a body covered with grayish or reddish-brown underfur.

Their unique black mask in the eye area makes them look cute and hides their dangerous character. Raccoons have a ringed tail consisting of 5 to 10 black bands.

It is effortless to spot tracks left behind by raccoons since they have handprints and footprints resembling humans. They are considered very intelligent.

Studies show that raccoons can remember solutions to various tasks for at least three years. They can also open containers with food and turn doorknobs.

Raccoons are omnivorous. They eat both plants and animals, including chickens. If you have a backyard in a raccoon-prone area, implement safety practices to protect your chickens.

Their cute looks should not deceive one into thinking that raccoons are harmless. They are very vicious killers. They are known to be predators of chickens.

Chickens are a source of nourishment for the raccoon. Raccoons kill chickens by attacking them chicken coops.

If it finds its way in, it will feast on the weakest chicken or a chick that cannot climb to the high shelves. An invasion by a single raccoon can devastate your chickens in a short time.

They rarely eat the whole adult chicken they kill and leave most body parts since the chickens are always too heavy for the raccoons. Due to their intelligence; they will remember the chicken house and often pay visits to pray to the chickens.

Raccoons eat the chickens on the spot, making it easy to spot their presence since they leave most of the remains where they have their feast.

Suppose eggs have been disappearing from the chicken coops; it is time to watch out for raccoons. Raccoons are good egg hunters. They can dig under barriers to find eggs.

Eggs are easy to hunt; thus, they give them a fast and tasty meal. They use their ability to climb shelves and steal the eggs.

If they get a chance, raccoons will steal and make a feast out of chicken eggs. One raccoon can scare the chickens away from their coop, and others will collect and eat their eggs.

Finding chickens headless in the coop is one of the surest signs of raccoons. One raccoon chases the chickens to a strategic point in the cage while the others pick their heads and leave the rest of the body.

Raccoons also pull the chickens’ heads throughout the space in the wires of the coop. Adult chickens are enormous and heavy for the raccoon to carry. They eat the head, leaving the body behind.

Even though raccoons are known to have a great sense of smell, they cannot smell chickens from a distance. However, these creatures can smell chicken feed.

The smell of chicken feed always attracts raccoons, and they will eat all the chicken feed that is within their reach. Raccoons can open containers using their sense of feeling in their hands.

They will also eat food left in the run. It is better to remove all the chicken feed and leave the bowls empty.

How to Spot a Family of Raccoons Nearby?

There are high chances of a raccoon infestation in the fall and late summer. However, they can be spotted by homeowners in all seasons since they stock enough food to sustain them during their semi-hibernation in winter.

They can adapt to both urban and rural areas. It is easy to identify raccoons, thanks to their distinctive features. It is easy to locate raccoons by their ringed tails.

They find habitat in porches, barns, and abandoned buildings. For maximum protection of chickens from raccoons, it is imperative to be aware of signs of raccoon invasion.

Here are some of the hints to look out for when looking for raccoons infestation:

Raccoons have unique tracks that are easy to spot. Their tracks look like human handprints because they use all their paws while walking.

Their long, distinctive “fingers” and a thumb enable them to open locks. Both their tracks, front, and back, are identical.

They use their sensitive hands to feel objects, making it easy for them to find things. If you spot tracks around your chicken coop, secure it with a childproof lock.

A raccoon is one of the most vivid and straightforward signs of raccoons in your area. Raccoons are vocal predators, and they make distinctive chattering noises.

When angry, they let out growls that are low growls. When they are excited, they produce chittering, screeching, and chirping sounds.

The most commonly known sounds of the raccoon are whistling and clicking its teeth. You can tell if there is a raccoon infestation within your home at night when they make gnawing sounds.

Raccoon scat is smelly and smaller in size. The scat length is less than three inches. Their feces are dark and tubular. Unfortunately, you are most likely to find their droppings indoors instead of outside homes, particularly in the attics.

The danger of their droppings is that they contain roundworm, which is dangerous not only for chickens but also for humans. Inhaling or ingesting roundworm eggs causes larval migraines, which might lead to death.

Can Raccoons Attack Chickens Inside Chicken Wire and Hardware Cloth?

Chicken wires are the best when the chickens are kept in. The chicken wire does not protect the flocks from outside predators. Raccoons can easily tear through chickens’ coop wire apart, thus accessing chickens swiftly.

Unfortunately, they can pull the chicken’s head through the chicken wire space. It is good to run hardware cloth with a fine mesh around the run and on the coop windows.

To make it hard for the raccoon to access the chickens in the coop. These cunning animals can burrow into runs.

Ideally, you can put a wire mesh at the bottom of the run or use an apron fence around the run. Chicken owners can add bedding of several inches to prevent the raccoon from burrowing its way inside the chicken coop.

Do Raccoons Eat Chickens During the Day?

Raccoons are nocturnal and active most of the night. This nature makes them hunt during the night often.

Even though it is easy to let your chickens roam freely during the day, thinking it is safe from raccoons, a hungry raccoon will not hold off hunger for the night.

Given a chance during the day, they hunt and kill chickens. Their coat helps them camouflage, which eases their scavenging during the day.

It is good not to take any chances during the day or night. Protect your chickens at all times.

How to Save Your Chickens From Raccoons?

It is better to be safe than sorry. Raccoons can cause disaster if they invade a chicken coop. You can apply a few tips to keep your chickens safe from raccoons.

Preventing the entry of raccoons and avoiding attracting them to your property are essential practices. Here are some everyday things chicken owners can put into practice.

1. Securing their coop and run

Ensuring the habitat of your chickens is safe and free from raccoons is the first thing chicken owners ought to suspect. Raccoons are brilliant and can easily break into a chicken coop.

They will take advantage of flaws in the enclosure and take advantage. When dealing with raccoons, you have to take note of how the door to the coop locks. These animals can open doorknobs.

A child lock will prevent the raccoon from getting into the coop. In cases where the chickens roam during the day, use hardware cloth to protect the chickens from being beheaded by raccoons.

Use an apron fence around the property or a thick inch of bedding in the chicken coop.

These lazy animals will always try to find the easiest way to access easy food. Raccoons have a very active sense of smell and can notice foul odors from a distance.

Do not leave food hanging in the feeder, use tight lids on your garbage and proper storage for the chicken feed. Chickens do not eat overnight; their food only attracts potential predators.

Also Read:  Life Cycle of A Chicken: Guide on Stages of Chicken Growth

Light can deter raccoons from entering the coop. They will get startled every time the light turns on as they approach. This method might last for a short period until the raccoons get used to it and ignore it.

You can use solar and battery operated lights in your chicken coop and run. Seeing the light, they will be shocked and run away.

Raccoons are deterred by smells such as cayenne pepper, vinegar spray, clothes soaked in ammonia, and some commercial products that work too.

Place a few rugs with ammonia around the coop fence to deter raccoons. Be careful, as ammonia might be dangerous for people and other animals.

Replace the cloth often, especially during the wet season. Pouring vinegar in the trash will discourage raccoons from opening food containers because of its smell.

If cayenne pepper is sprayed around the fence, raccoons cannot come near the chicken pen. Cayenne pepper is a natural product, which makes it less harmful to chickens and humans.

Consult with a veterinarian to avoid using products that cause harm to chicken.

5. Be noisy and present

Being noisy and present is the easiest way to keep cacoons far from your flock. Being there is simple. They use their senses to know your presence and will likely shun the property.

The use of noise to deter raccoons works because raccoons do not come near a noisy place. If you decide to keep a dog for the security of your chickens, make sure that the dog is vaccinated against rabies. Raccoons are known rabies carriers.

If you want to trap a raccoon, always check your community guidelines. If the policies are favorable, use a have-a-heart trap.

This trap will not harm the raccoon. Use tasty and sweet-smelling cat food to trap the raccoon.

Patience is needed when using this method since raccoons are clever enough to figure out how to get the bait without getting caught.

Once the raccoon is trapped, please take it to a different location or give it to the relevant authorities. Be very cautious when handling raccoons because of their health dangers.

Suppose your community guidelines do not allow you to take matters concerning raccoons into your own hands. In this case, you might opt to contact the wildlife removal service to have the raccoon trapped and taken elsewhere.

Raccoons also pose health risks to the chicken owners if not appropriately handled. When scared, raccoons can cause physical injuries such as scratches.

Experienced removal techniques should be applied during this process when relocating the trapped raccoon.

It is very frustrating to deal with a predator such as a raccoon. The war against raccoons is costly and stressful.

Even though these cunning animals are cute, they are very dangerous to you and the chickens. They kill chickens and carry diseases such as rabies and ringworm.

Raccoons will attack a chicken coop during the day if need be. Similarly, they will hunt at night due to their nocturnal nature.

I hope you got your answer to the question: Do Raccoons Eat Chickens? Share your experiences below about raccoon attacks on chicken coops. 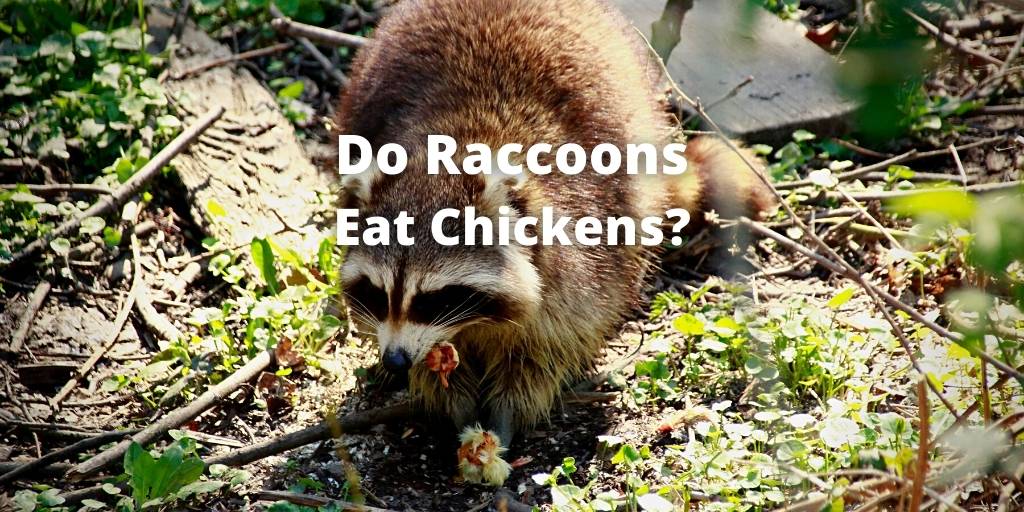