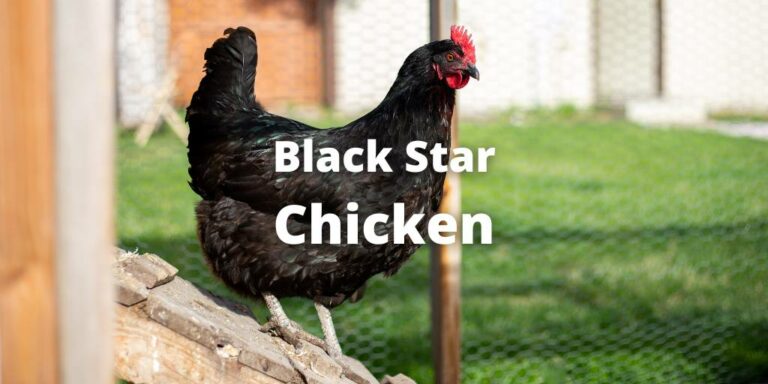 Black Star chicken is said to be a result of a cross between a purely New Hampshire rooster or Rhode Island rooster and a Barred Plymouth Rock hen.

It is an attractive, tough, and docile breed that is commonly raised in various parts of the world. Black Star, a sex-link hybrid chicken popular for its egg laying, meat and good personality.

This chicken breed is popular for its unique black color, egg laying and docile nature. The Black star chicken is also a non-setter breed. The birds are medium size and can be kept in portable pens or large coops.

After the end of the Second World War in around 1945, it is said that this chicken breed was created in the United States.

This chicken breed was appreciated for its ability to produce more meat and eggs compared to other breeds at that time. Moreover, these are sex-linked chickens, so recognizing their sex is easy in chicks stage.

It is also said that the first Black Star chicken was created in 1954 by crossing a New Hampshire rooster with a Barred Plymouth Rock hen.

On average, the lifespan of a Black Star chicken when well cared for is about 5 years.

It is important to note that the lifespan of a Black Star chicken can vary depending on their condition and diet.

However, reproductive issues and health concerns are the major cause of their death in most cases. Proper immunization is a major part of raising chickens.

These lovely birds are known to be docile and hard little workers. They very rarely cause injury to their owner and prefer to live in the house rather than outdoors.

Black Star chickens are adaptable to many environments such as cold climates, hot climates, and even humid weather. That’s why this chicken breed is popular worldwide.

They are friendly and easy to handle, but they can be aggressive with each other if they don’t grow up in a big group of chickens. In a very rare case, the roosters of this breed become aggressive.

The Black Star is one of the best egg-laying chickens in the world. They are effortless to handle and will be happy to follow you anywhere.

However, like any other breed of chicken, their egg production may vary and not all hens have the same number of eggs laid over a period of time.

The Black Star chicken is one of the best layers that will start laying eggs at around 22-24 weeks of age.

The Black Star chicken breed is considered by many as one of the best laying chickens in the world, with an average of 5 weeks per week, which translates to 300 eggs per year.

The hens have black feathers with red-brownish flecking on the breasts. You may see almost black color feathers all over the body.

Black Star chickens are medium-sized chickens. The weight of a mature rooster is 7-8lbs, and that of a mature hen is 5-6 lbs.

The appearance of Black Star chicken is unique as compared to other breeds. They have a single red comb.

They have red wattles and earlobes as well. The beak is normally black with some yellow markings. Their legs are yellow with black colored feet and a white tail.

The legs of both sexes are of the same color that is yellow. They have a rectangular body with a rather short neck.

Although it is bred purely to produce eggs, the Black Star chicken chick is actually a pretty fun bird to have around. They are very friendly and usually the first ones out of their cage when it starts to get dark.

The female chicks are totally black with some brownish flecking on their neck and heads. The male chicks are black with white patches on the head, just like their mothers. They thereafter develop white bars in their feathers.

Due to their great qualities, the Black Star chicken is a very popular breed and has many advantages that make it very attractive for people to buy.

They produce many eggs that people can sell at a high price. They are easy to handle and have a docile nature. This makes them very popular with their owners.

Below are some advantages of raising Black Star chicken:

This makes them highly sought after since they have a good market value and will get you a good price. It also makes them an easy breed for the beginner to get into.

They are good egg-layers

Black Star Chickens are one of the best egg-laying chickens in the world. They lay about 300 eggs in one year.

They are effortless to handle

Black Star chickens are easy to handle, and you don’t need to put much effort for them to come close to you.

Because of this, they are very friendly and easy to be enjoyed in the house. They seem to enjoy being around people, and they get along with cats as well.

They can be kept in small places

Black Star chickens don’t require a lot of space for breeding. They can be kept in a small space and produce eggs at a large rate.

They are very resistant to diseases

Black Star chickens are resistant to diseases such as blackleg, which affects other breeds of chicken. This makes them very popular among communities that raise chickens for eggs.

Black Star chickens hardly molt, which makes them easy to maintain and keep around the house. Molt is the time when a chicken loses feathers and skin that are needed for protection. They are slightly tender at the time of molt.

They are very friendly

Black Star Chickens are one of the friendliest breeds of birds and get along well with people and other pets. They can be easily handled, trained and kept near your premises.

They are very playful, and you will not just get eggs from them, but also a lot of entertainment that makes looking after them easy.

These birds are good at keeping rodents at bay. This means that you will not have to divert your time removing rodents and other insects that destroy crops in the farms.

They are adaptable to many environments

They are quite friendly and easy to handle, but can be aggressive toward one another if not raised in a large group.

No fear of predators

The Black Star chicken lays large white eggs and is resistant to predators such as foxes, coyotes, hawks, cats, and other such animals. They are also not afraid of storms and thunder.

Despite being one of the most popular breeds of chickens, there are several difficulties that accompany keeping a Black Star chicken.

As the Black Star chicken is an egg-laying breed, they are prone to various reproductive system health issues.

Like other chickens, they also infested with various parasites like lice, mites etc. Use a good deworming medicine if you worm in your chicken’s poop.

The hens of this chicken breed are excellent layers, but as they lay almost daily, they need some extra vitamin and minerals added in their daily diet. A little amount of apple cider vinegar is the best immunity booster for chickens.

Adding a few number of treats in their life will make them happy, and also it keeps them healthy. Treats with high amount of protein like mealworms are recommended for egg laying chickens.

Not only the packed feed, providing them green vegetables is another best thing which will enhance their health.

Do all need immunization, which your vet recommends for your flocks. As the vaccinations keep the flocks safe from all deadly diseases.

Below are some common questions that people may have about the Black Star chicken:

Where does Black Star chicken come from?

This breed is a cross-breed of the New Hampshire chicken or Rhode Island Red breed rooster and the Barred Plymouth Rock hen.

How many eggs do Black Star chickens lay?

On average, a Black Star hen will lay about 300 eggs per year. This is about 6-7 eggs every week for a year.

The normal lifespan for a Black Star chicken is about 5 years.

How big do Black Star chickens get?

They are medium-sized chickens and roosters will weigh 7-8 lbs and the hen will weigh about 5 lbs.

Black Star chickens are great for people who like large eggs and a good layer of eggs. They are easy to raise, as compared to other egg laying chicken breeds.

They are a very friendly and lively breed of chicken, which makes them good pets. Black Star chickens are priced affordable depending on where you live and which breeder you get them from. 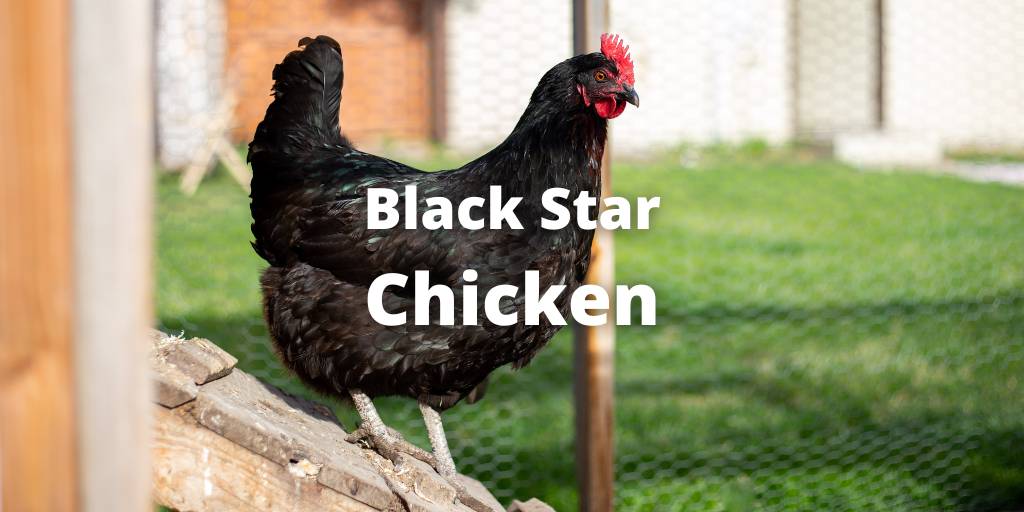